Learn about predatory publishing and tips on how to evaluate journals for your article submissions.

What are predatory journals?

Predatory journals are the product of publishers, known as predatory publishers, who are unethical in their publishing practices by not following industry standards, usually aggressive in manuscript solicitation tactics, and deceitful about their business operations and services. "They exist primarily to extract fees from authors" (Sorokowski et al. 2017, 481) and are far less concerned with research and publishing ethics (Beall 2017, 275).

How can I determine if a journal is considered predatory?

There are a number of ways to evaluate a journal as predatory or legitimate. Be wary of publishers without verifiable contact information; short time from submission to publication, usually within days; fake editorial boards; call for submissions that arrive in a spam-like email; journals with no prominent displays of author fees; missing or dubious statement of a peer-review process (Beall 2013, 3; Butler 2013, 435; INANE 2014, 3-5). Check the journal title against the titles in Cabell’s Journal Blacklist. When in doubt, please contact your liaison librarian.

The literature cites a blog created and maintained by Jeffrey Beall that listed journal titles and publishers with suspicious predatory behaviors. “Beall’s List” was officially named “Scholarly Open Access” but was taken down in January 2017 due to threats of legal action and political pressures. (Beall 2017, 273; Is it legal? 2013, 155). In July 2017 the publisher, Cabell, released their subscription database Journal Blacklist. Conversely, there are also lists and publications of legitimate journals (Berryman et al. 2016). Please feel free to consult with your liaison librarian for assistance in evaluating a specific journal.

What is so bad about predatory publishing?

Is it typical for a legitimate journal to contact me, requesting that I submit an article?

It is a red flag if a publisher or journal editor approaches you to publish in their journal. Typically, the opposite occurs and the researcher pursues the journal. "These [predatory] publishers often send out flattering individualized email solicitations to potential authors inviting them to submit manuscripts or serve as "guest editors" for their journals." (INANE 2014, 2). Spam-like email or web pages with marketing-slick appearances are also signals that the journal may be predatory (Berryman 2016). Thoroughly evaluate the journal before submitting your article. When in doubt, please contact your liaison librarian.

What are the origins of the predatory model?

Simplistically, the early days of the Internet (1990s) spawned an Open Access movement. Supporters of this movement felt that research should be freely available, thus bypassing publishers of the traditional, paper production and subscription payment model. The Open Access movement gained world-wide acceptance when international bodies declared that non-compensated research articles should be “available online, free, and with the smallest possible number of usage restrictions.” (The Declaration of the Budapest Open Access Initiative, 2002; the Bethesda Statement on Open Access publishing, 2003; and the Berlin Declaration on Open Access to Knowledge in the Sciences and Humanities, 2003).

Publishing is a business, and revenue generating models changed from subscriptions to author fees, called Article Processing Charges. As authors began to fund the publishing model in place of subscriptions, unethical, opportunistic publishers appeared, whose sole purpose was to generate revenue. As the unethical publishers honed their trade, the resulting predatory system of more articles, published faster, with no review or evaluation, was established (Beall 2017, 274; Liesegang 2013, 425).

No. There are many respectable open access journals that are not considered predatory (Butler 2013, 434). "While predatory journals are almost always Open Acess, most Open Access journals are far from predatory." (Roberts 2016, 618). The important thing for authors to do is research the journal in which they hope to publish.

Are all articles published in predatory journals bogus?

Why do I have to pay a publisher to get my article published?

When your article is published in an open access journal, you will likely be required to pay an article processing fee. Open access journal content is “free” to the reader, and the method publishers have established to recover some of the publishing costs is to charge the authors in place of a subscription model. This is known as the “gold” standard (Beall 2016b, 1511).

Who are the easy targets of predatory journals?

Authors who are in a hurry to have their research published often fall prey to predatory tactics. Faculty whose institutions require large quantities of publications, or quotas, are also at risk (Beall 2013, 6). New and inexperienced faculty, especially outside of the United States, are also susceptible to the lures of predatory journal publishing (Clark and Thompson 2016, 1; Al-Khatib 2016, 283).

Are there certain disciplines that need to be more wary of predatory journals than others?

Can I believe the impact factors claimed by the journal publishers?

Impact factors are a measurement of how often a particular article has been cited by other researchers. These numerical ratings are included in databases such as Scopus or World of Science. However, predatory journals have been known to claim a high impact factor when, in fact, the number has simply been fabricated (Berryman 2016).

What is a hijacked journal?

Beall defines a hijacked journal as one “where someone has set up a site pretending to be an already established, reputable journal,” when in fact this site is a portal to the predatory publisher’s door (Beall 2016a, 79).

Are predatory journals indexed in the library databases?

Guidelines for Evaluation the Integrity of a Journal

Printer Friendly Version of this Table.

References Used in Building the Content of This Guide 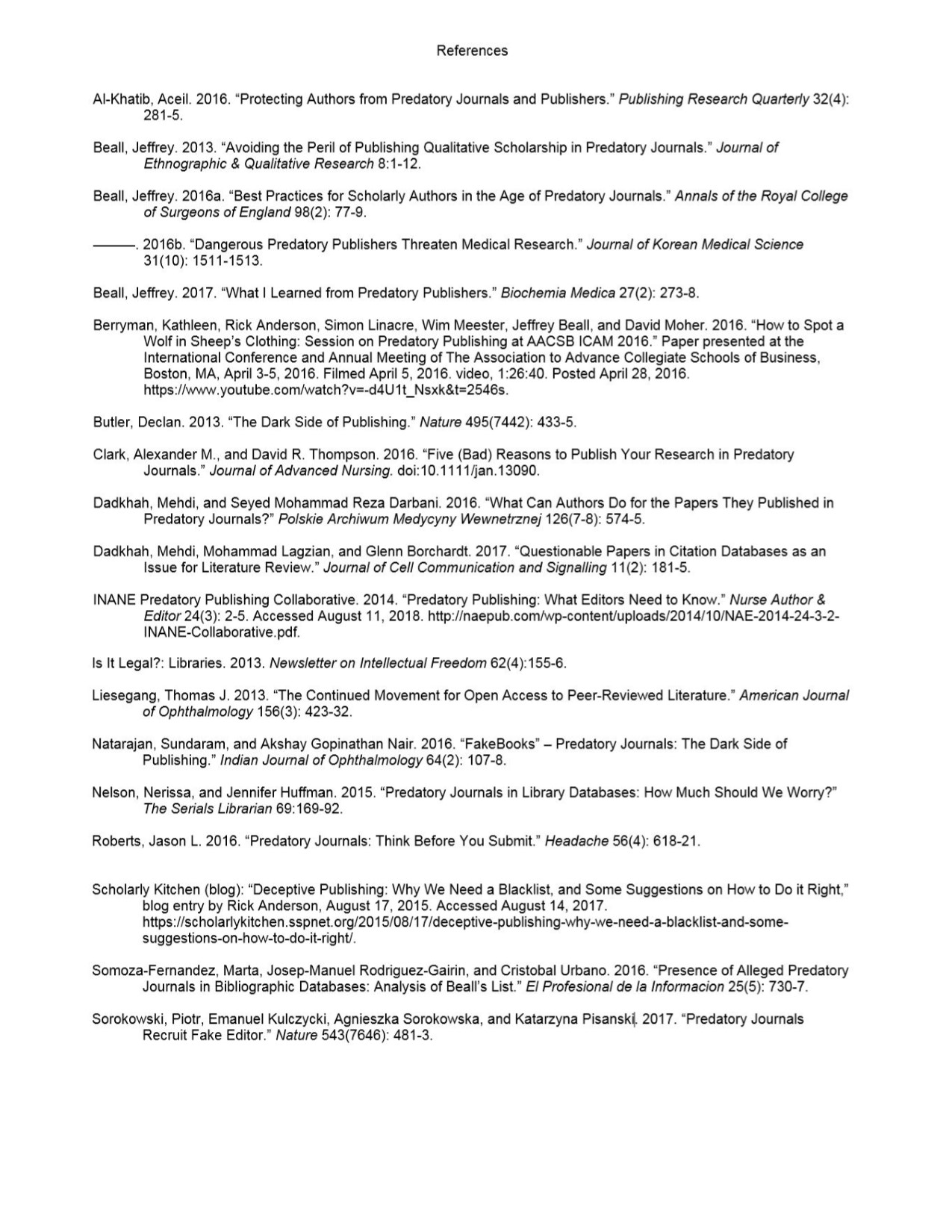