I don’t have cerebral palsy. I don’t need a device to communicate. I don’t even have a photographic memory. My life is so different from Melody’s life. I can use all of my fingers to type on a computer. I can walk around the block. I can take part in a regular conversation about the St. Louis Cardinals. I don’t need an aide to help me. I have two siblings, a brother and a sister. My sister is about as free of disabilities as you can get. My brother is a different story.

My brother has difficulty in expressing his words because he has a form of autism. Like Melody, he tries to tell people many things, and like Melody he gets frustrated when people don’t understand him. Similar to Melody, he has a device to communicate, but unlike Melody’s, my brother’s device is quite complicated to use. On top of this, he does not always have his device when he needs it the most because the battery can fail at any time.

Because of his talking complications, people don’t understand him, and sadly he gets frustrated.  What’s so hard to understand about this?  If I had trouble expressing myself, I would be frustrated, too. For example, if I couldn’t tell my parents that I hated peas, and they kept giving me peas, or if I couldn’t tell them that I love eggnog and they kept offering me carrot juice…I think you get the picture. When my brother gets frustrated, he might tear paper or throw things. Sometimes, to get attention, he has even hurt himself by hitting his head or banging his chin. Before I read your book, I never understood how he could survive or how to help him.

Then, I read your book. Though cerebral palsy is different from autism, there are some things in common. People with cerebral palsy or autism are held back by symptoms whether it’s lack of mobility or lack of expression. Also people with autism are not dumb and the same goes for people with cerebral palsy. Reading Out of My Mind gave me a different perspective on things. It is the only book I have read that was from the impaired person’s perspective. I never thought “What is she crying about?” because I could vividly see what Melody was thinking.

Your book made me think differently about my brother and begin to put myself in his shoes. I began to help him express his feelings. For example, when I ask him a question, I give him time to respond rather than ask him over and over again like I used to. I also have learned how to interact with my brother. We wrestle together and chase each other around the house instead of doing things separately. Before I read your book, I didn’t make the effort to play with him. That was a big mistake because seeing my brother’s winning smile when we played for the first time has made me realize that we have a very special bond that no one can break.

It is important for Melody to feel confident in order to succeed, and that’s very important for my brother too, just as it is for any of us. When Melody participated in the Whiz-Kids competition, her family and caregiver, Ms. Violet supported her and helped her study which gave her the confidence to win. It is also vital for my brother to experience success. When he brings my mom the iPad when she wants him to watch videos, we don’t overlook it. We praise him for doing it. This gives him the confidence to do better and progress. If he hides in the closet and stuffs his face with Lindt chocolate truffles without asking, we don’t scream at him. Instead, we take the bag away, tell him to ask us first…then we stuff our faces with chocolate. This doesn’t make him afraid of us, instead it makes him laugh, and it makes us happy because we get to eat chocolate (chocolate equals treasure in our house). When he flashes his million dollar smile at us as we are eating chocolate, it sends an unspoken message that words could never express.

Now I know that my brother can survive. When Melody was in Mr. Dimmwit’s class and everyone thought it was a mistake that she got 100% on the preliminary Whiz-Kids test, she didn’t give up. She studied very hard with Ms. Violet and then aced the final test to get into the Whiz-Kids competition. This made me think that my brother could survive all that he was going through and that people around him would realize how intelligent he is. If Melody could endure all the taunts and insults given by Molly and Claire, my brother can endure the ignorant people who don’t understand him. If Melody can tolerate not making it to the national Whiz-Kids competition, my brother can tolerate his challenges. He works so hard in his therapies, and I am confident it will pay off. 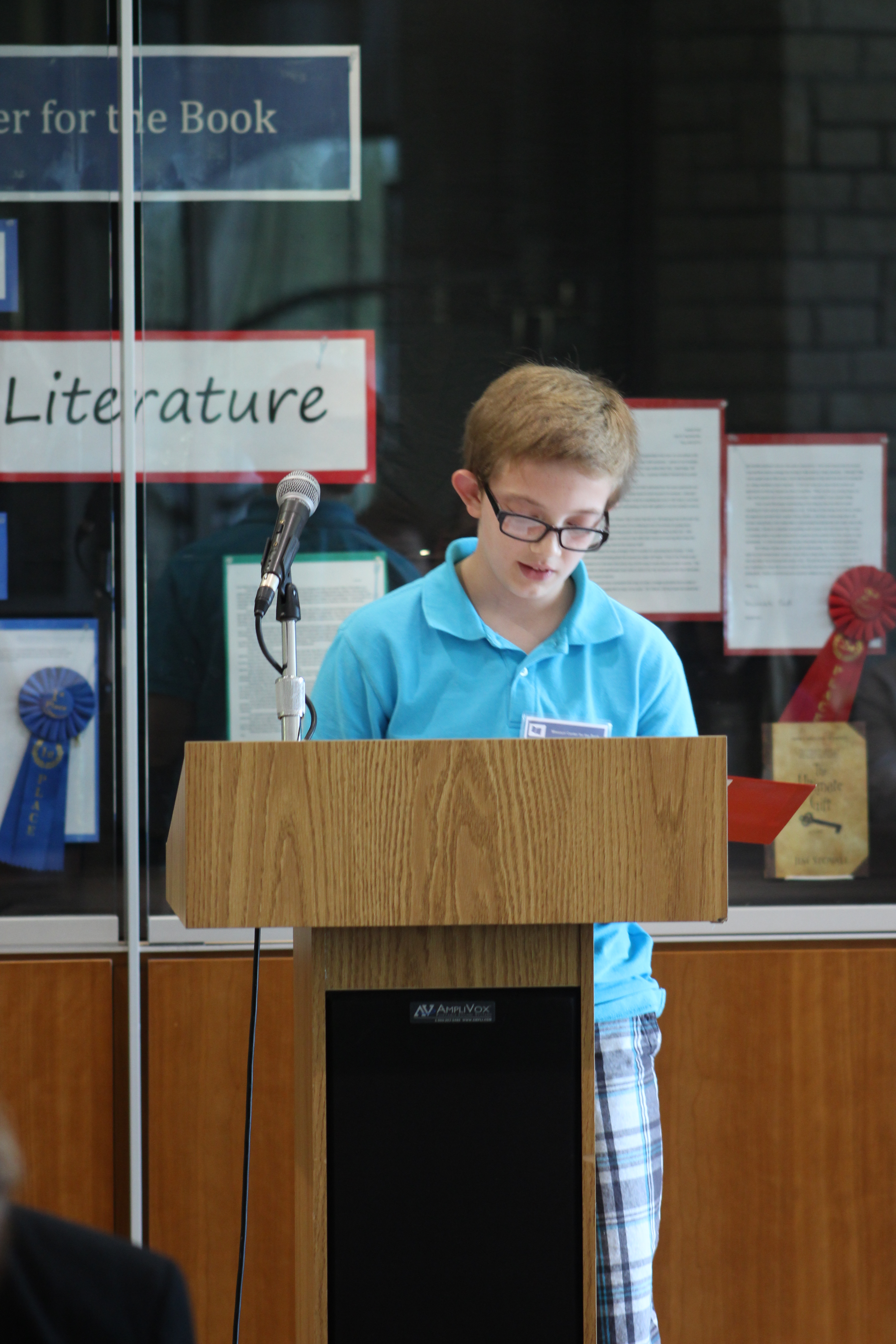 Your book The Giving Tree showed me a tremendous amount about how to really live my life with a positive attitude.

The Giving Tree showed me that to take is one thing, but to give until all you have is nothing but your heart, mind, and a stump are VERY, different things.
I guess you never realize, it's like Christmas, at least for most kids, you take but you don't really give. You grow older and you realize this, but some people are already a stump. It's sad, but some stumps don't mind, just like the TREE, until you get lonely. That happens everywhere, we live in a place of greed.

I never thought of the fact, so I must remember that after taking so much the other deserves a lot, even if it's just company.

After reading this book I began to think, long and hard. To be kind is giving, maybe not in the way most people think.

This piece of work showed me a lot, enough that I wanted to be just like the TREE, but it is hard because sometimes you want to be the taker not the giver so you have to push your want away and give others their needs. Life is full of takers and givers so to be the giver you can't do what others are doing{taking} and you must give.

Everyone deserves kindness, so you give your kindness away, first your apples.Give those apples to another for them to self, so they can support themselves. Then your branches and you soon give away your trunk. You are left with a stump, but we have to know we did something great we gave what others needed, but you could feel lonely or sad because after all you have given them they return nothing. Though even with your seemingly useless trunk you can still GIVE, so you or anyone are never useless. The Giving Tree really helped me take a step furtherinto my driving question: Why should I help others if they don't help back? You should always help, because isn't just the excitement of seeing others happy enough? To realize this has made me a happier person. When the TREE gave everything away that's when I got the ahaa moment.

Using the TREE as the giver is a very smart representative because trees are givers in the real world and the story line is something that everyone needs to understand. The TREE helped me understand the plot and about conserving our natural resources, which are two very big problems today. Not just showing the TREE the boy was placed as a real life person or more how most people act, they love something, and then they get older. Consequently we get bored of that one thing. Taking something from that thing, whatever it may be isn't what we usually do and that's why this story doesn't just have one plot it has many. I think if we took a step back that this book really shows a lot, more than I think, and maybe more than I can explain. More or less The Giving Tree is something very affective and influential.

Just like for any other twelve year-old girl, the mad dash for popularity has begun in.my
class, and I feel trampled. As past friends clamber to be at the top of the social pyramid, I feel
excluded and ignored. Like Tally and Peris in your book, The Uglies, I used to want to be part of
that group, even had tight friends in that group. Don't get me wrong, I have independent, amazing
friends that also don't want to be followers of the clique, but when I look back and remember
times when I actually invited some of the most egotistical members of the ever growing plague to
my home, it saddens yet disgusts me.

Then I think of Tally. Peris left her for the "ideal" life. He promised he'd stay in touch, that
they would meet again, but it seemed to be a scam. He would only be friends with her when she
was a Pretty. I feel like Tally, left with broken promises and memories almost too good to be true.
My friends support me, even cry with me, but it's still not enough for me to tune out the whispers,
the sudden silence from the crowd of "Pretties.

But just like Tally, I get stronger every day. No longer do I want to be a part of the clique,
another worker bee for the queens. I have friends that support my every decision, my own
personal cheerleaders. Tally discovered that being pretty and popular wasn't everything, that
being real-is twenty times better than being fake.

The pull to the group is strong, I won't deny that, but I know why the leaders of the group
want people with them. They want to show their hypnotic power over people. They're actually
less like Pretties and more like Specials. They gossip and backstab outsiders, sometimes even
people in their tight circle. So even though my past friends act like Peris, leaving for the "it" group,
abandoning me, I have found the most loyal companions. People like David who surround me
with their kindness, a barrier to the clique.

The Uglies showed me that you should think about what you really want in life, not what
everyone else wants. Who cares if Lululemon clothing is in? Are you wearing it because you like
it or because the queens declared it is the must-have brand of the season in their constant
gossip?

The Uglies helped me realize that everyone should just slow down and think for just a
minute about who they really are. I doubt someone would want to say they're a desperate
follower of the popular pack. Someone who's so insecure about their image that they can't even
be with the people that would really make them happy. I slowed down, took time to think, and
ended up finding my real friends.

Thank you for helping me discover my true self,