I am writing to tell you how much I enjoyed reading your book, Catch-22. I really liked how it was both very entertaining to read as well as very critical of both the society we live in and the horrors of war. You are also able to point out the intrinsic flaws in many of our ways of logic and process, specifically things that, in the book, are called Catch-22’s. Probably the thing that most impacted me was the central message that the world just doesn’t make sense, people don’t make sense, wars don’t make sense, but we deal with them anyway.

In my opinion, the most comic of your irrational characters is Milo. I really liked how you showed the “American Dream” of becoming rich at all costs in such a strange and twisted light. He makes money, but he must sell out his country, steal possibly life-saving equipment from the planes, and even fights as a mercenary for both sides of the war. I also like his standard counter to any argument of “What’s good for M&M Enterprises is good for the country,” and more specifically how it always worked. All the people in power seem to see this as a valid excuse, and Milo’s bribery also helps a lot too.

Catch-22 changed my opinion of war. War is different in all situations and needs to be monitored and the troops led by competent men and women. These persons need to be chosen for their expertise and understanding of war tactics. They must take an active role in planning. A passive leader would do no good. Of course we need to avoid war at all costs for it always brings suffering to those fighting and those on the sidelines.

Throughout the book, there are characters that seem to act irrationally, but mostly because they are being placed in an irrational situation in an irrational world. The world of war portrayed in Catch-22 is one of incompetent commanders, nervous pilots, lonely officers, greedy chefs, and even an undead doctor. It’s hard to keep one’s sanity when all you’re surrounded by is the insane: deaths by the thousands and the destruction of literally everyone’s way of life, whether they are innocent or not. The one event that sends Yossarian into a downward spiral of depression, confusion, and mild insanity is the gruesome death of Snowden. I doubt I will ever forget that scene, with his guts spilling of his flak jacket as Yossarian tries to comfort him in his last moments. If ever anyone told me that war is worth it, or that it is not a tragic symptom of the human condition, I would ask them to read this book, or at the very least that scene in particular. Is war necessary in some cases? Definitely, but it comes at an impossibly high cost.

I hold Catch-22 to be one of my favorite books, because it is both entertaining and has a message to tell, so thank you for writing it.

I value myself as a man of an understanding nature, taking the moment to consider the
perspectives of not only myself, but also those who thrive at my side. Yet, it is only through your
vision within the "Inferno" that I have truly witnessed the world, and heard the whispers of its
secrets. It is of a common belief that all individuals, whether known in memory, in infamy, or in
legacy, can be exemplified in three parts: by their voice, their thoughts, and their hearts.
Throughout most of my earlier life, I had managed to grasp at the strength of my voice, and the
vitality of my thoughts, but I had yet to conceive the power of my own heart. It is here, that my
story begins, and your story ignites.

I was brought into this world as many before me have been: within a life of discrepancies
and misfortunes. Both of my biological parents were incompetent, and deemed unable to
properly care for me, and I soon found myself along the endless mysteries of the foster care
system. I was one of the luckiest: it didn't take long for me to be taken in to a new family. The
first few years were good, but as all good things go, they were quick to come to an end. My
mother quickly became incomprehensibly mad every day. I constantly found myself being
grounded to my room for weeks, with minimal explanation, where the only thing I'd be able to
do with my time was read. This is where my love for reading emerged. I would read for hours on
end. When I ran out of books, I read. them all again: the Bible, the dictionary, and the
encyclopedia. Reading became my escape from the life I led in the real world. When reading a
book, I was free.

Many years continued like this, where I would slowly become more aware and intelligent
and isolated. Soon, my parents divorced, now leaving me as a member of not one broken home,
but two. However, after their separation, things changed. I was no longer a victim, but a means
of sanity. Yet, a considerable amount of damage had already been done. In my isolation, I had
neglected my humanity. I no longer cared for the emotions or feelings for others, and believed
that only logic could explain life's discretions. I had become more observant of the world around
me, and found distaste for the constant disappointment found in expressing emotions. In gaining
my voice, and my thoughts, I'd lost my heart.

Then I was introduced to the "Inferno", and everything became distilled. I was met with a
mind of indescribable intellect, your mind, trapped within its social and metaphysical prisons,
and still capable of defining the world as you saw it. You held no fear of persecution, for you had
already been persecuted: there was nothing left to lose. It was in this perception that I found your
​message, and was reminded of life's truest conviction: striving to improve the state of mankind,
in any and every _way possible. The allegorical references and metaphors bound by your
theological structure is what truly define the key to the power and magnitude of religious
consequence, being the embodiment of the Inferno itself. Though trespassing among ideas and
structures of questionable reasoning, such as the depictions of a multitude of defined eternal
tortures in comparison to a sole chamber, and the overlooked intentions of submitting all souls of
indifferent spiritual prowess to an eternity of undignified solitude, his impressionable display and
definition of the divine charisma gives, what I feel to be, a true necessity in the blight of spiritual
understanding and enlightenment: structure. All who had committed sin were then punished
according to their sin, no more and no less. Though hidden through the scorn of the fires, the
identities of the condemned were not infinitely lost; several individuals of notable character
could make themselves distinguishable to you. In its finality, as if not to truly capture my own
voice, those of legendary scientific prowess were not denounced for their perceptions, but were
given their own temperaments in the dark void, supporting a moral understanding of the
importance of physical delineations in our world.

In finding my personal inspiration in your revelations, I became enlightened to the true
nature of life, and what we witness within it. Many of us will inevitably be faced with adversity
and tribulation: life is fair to everyone only in the idea that it is consistently unfair to everyone.
However, it is what you are willing to do with the weights of your adversities that define who
you are, and what you can become. Addressing this heightened awareness as possessing "infinite
perspectives", this allows me to comprehend the provisions and emotions surrounding the
decisions, opinions, and intentions of the people I interact with in daily life. This conviction sets
within me an ideal disposition when it comes to empathizing with the perspectives of others, no
matter how far-fetched they might seem. It is with this understanding, that I now find it difficult
to ever stop thinking, both figuratively and literally. I obtain, on average, two to three hours of
sleep every evening. The perspectives are infinite, so my thoughts are infinitely alive.

I think of war. I think of poverty. I think of inequality. I ask myself what the grand
purpose is: am I to live to make myself happy, or others happy? I ask myself what I can do, what
talents, skills, and intuitions of my own accord that I can use, to help another. I question whether
or not I should help another, and it is here that I realize that I have begun to engage myself in the
consideration of others. In the quest of finding my own purpose, I have questioned my own
moral identities, and reflected my care for those that surround me. My heart had found itself a
place upon my sleeve. My name is Keelly Michael Jones, and in all of my questions, my
concerns, and my values, I hope to have found what was lost to me so long ago: my heart, still
beating to compel the world, as its lessons, found through your lessons, have compelled me. 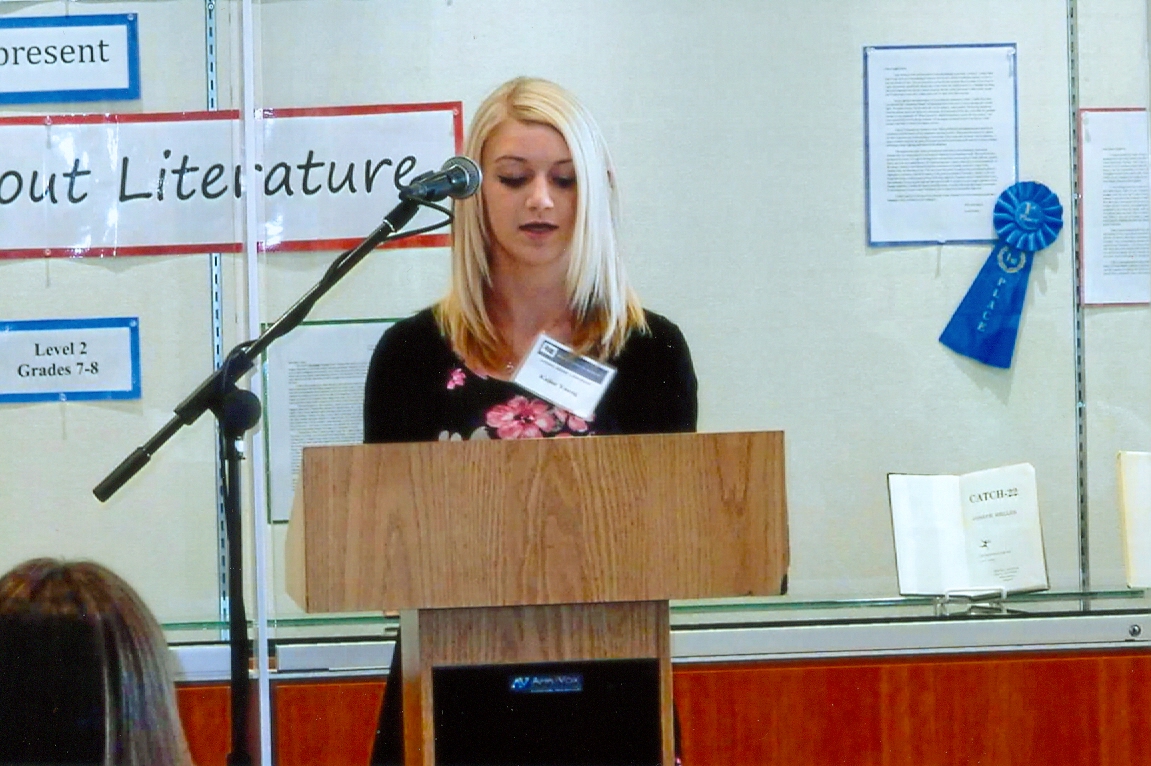 Your book Speak changed my life.

When I was 13, I went through a really hard time and went through things no
one should ever have to go through.

In 8th grade, I came across Speak for the first time. Something about it just drew
me in. I took your book home and started it immediately. Speak had me at the first
page; it felt oddly familiar, because I was very similar to Melinda. We went through
similar things, It (him), broken friendships, a battle. I felt like no one could understand
what I was going through, it was tough.

There were times in Speak when I would wonder why Melinda never said
anything, never really did anything about what happened to her, but then I would
remember what I did, and how I reacted after I went through it, and understood.

At the time, I was no longer struggling with the fact that it had happened, the
shock was gone.

I thought the struggling was coming to an end.

I was wrong, because after you go through something like that, you don't just
come out of it okay and the way you used to be. You have to learn to live with the things
it brought to you: depression, worry, new fears. You can no longer trust people; it
doesn't matter how hard you try, but you learn to live with it because it's the only thing
you can do. When I went out to buy Speak to have for myself, I found in the very
beginning some words and phrases taken out of emails you had gotten from fans of
Speak and I realized, I wasn't alone in this; there are other people out there just like me,
who went through the exact same thing I did, who are trying to build themselves up
again, after having it destroyed by someone else.

At the end of the book, Melinda finally speaks. It made me smile, because she
struggled for so long on her own, and was able to bring herself back up, finally build up
courage and fight back. I felt a little piece of me come back that I had been missing for a
long time. I gained back a little confidence and even gained a little inspiration to maybe
someday tell my story and maybe even save someone's life, like Speak saved mine.